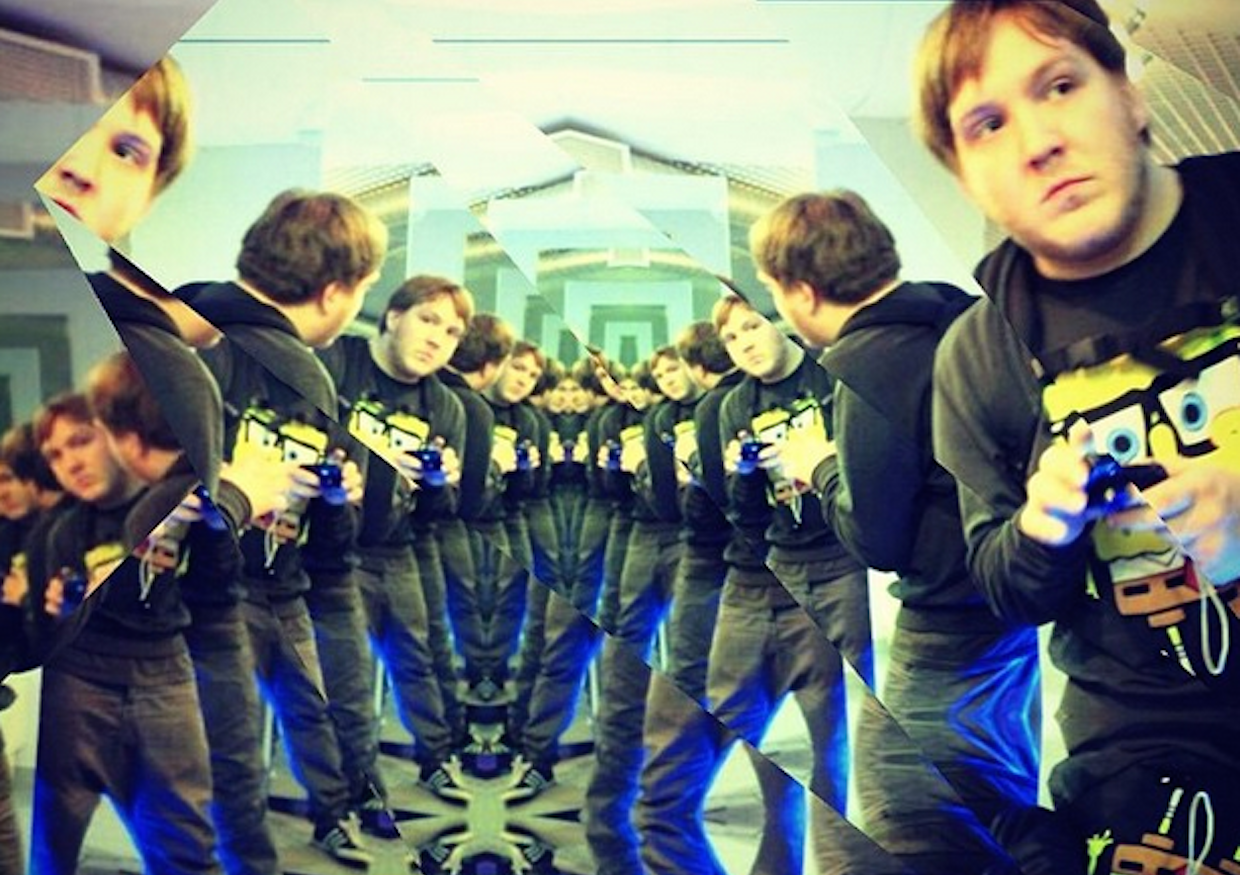 Chris Moss Acid began his sound riffing off the IDM that was prevalent in the late 2000’s Netlabel community, finding homes for his earlier releases on Swishcotheque, Net Lab and Wrong Lab among others. At the turn of the decade CMA turned to more techno and acidic tilted realms gaining notoriety for his raucous hardware sound and taking out pretty much his full studio for his live sets around Europe. In the last few months he’s enjoyed a resurgence in releases, with the tracks he penned in 2014 being signed to respected vinyl imprints Don’t, Computer Controlled and Shipwrec that we’ve been feeling and getting pretty excited by so we dropped the Bournemouth based producer a line to ask if he’d step up to provide our latest podcast. What he’s delivered is a DJ mix containing 97% his own production which you can listen to alongside our interview where you can find out a bit more about his history, how he creates his tracks and what more he’s got forthcoming that we can look forward to in the coming months.

Kind of if you think of acid, and rave your name immediately comes to mind but where did it actually all start out for you?

Musically, my earliest memory, my brother giving me a cassette tape of GnR Lies, in about 1987/88, he kept the insert cover because it had that naked chick in the cover and he thought I was too young. I knew shortly after that I wanted to make music, even though it came like 10 years later, when I got my first 4 track, guitar and drum machine. I was lucky my family have pretty good taste in music, so I always had the KLF, Barry White, Armando, Frankie Knuckles, 808 State, The Cure, Metallica, Nirvana, Daft Punk and selected Pete Tong essential mixes playing when I visited aunties, uncles and cousins.

The earliest ”WTF is that, I have to do something like that” memory probably Pacific State by 808 state. That sax brings back the goose bumps even to this day. Also I guess, re-hearing Aphex’s Selected Ambient Works 85-92 made me want to write electronic music, then re-finding all my favourite tracks from when I was younger and re-listening to them as a producer was a great experience, still buzzing off that feeling, loads of ‘oh thats how he did that’ moments.

What does Bournemouth have to offer the average acid lover?

Absolutely nothing, I’ve given up trying to do anything here, DJ/Live sets. But it’s worth coming down in the summer just for the beach culture. It’s pretty nice, much better than the ‘’music’’ scene. While it’s shit for acid music, if you look beyond that, I do get a certain of inspiration from living and hanging out in Bournemouth, I just wouldn’t want to play here musically.

What does your studio look like? Can you run us through the full works and about what your production process looks like?

Well, let’s see, my studio literally hasn’t changed a lot since 2005! So that is mostly 10 years of the same set up. apart from buying a MPC1000 2 years ago the core basics have been pretty much: TB-303, SH101, TR707, TR606, Boss SE-70 FX, ESQ1 and a Akai MPC1000 which is broken and I only use it as a drum machine. Might as well mention my mixer too as I class it as important as anything else, it’s a Mackie DFX12 and has some pretty pointy reverbs and flanges built in.

If you listen to some of the earlier’ tracks (2005-2009) I did, there is more strings and melody, pretty much what was classed as IDM back then. I used more VST’s and computer based sequencing, around 2010 I bought a ESQ1 synth off Ed DMX and that’s when I kind of went a bit more hardware just as the mighty empire of IDM was dying and acid was showing it’s face again. Between 2010 and 2015 I’ve become more and more minimal, but harder, a massive influence for this ‘sound’ was listening to albums like ‘The Brown Album’ by Primus and stuff like The Strokes ‘Is This it’ and Big Black – ‘Atomizer’. Which brings me on to answer the next question!

When you take it out live you still bring a very extensive hardware set up with you – how different is this from the studio? What else goes into the preparation for these shows?

These days it IS pretty much my studio in a suitcase, but back in the early days I used to use **too** much gear, you know? I used to basically make a new 1 hour show up of brand new music each live set, which took me about a week to program with the drums, 303, 101 settings drawn on paper, and at these shows I used to just get lost, had too many options what to use, and as I didn’t have much music anyone knew, it was pretty much a live improvised set, sometimes it worked out fine, but more often than not, I used to leave feeling pretty heartbroken if the set didn’t go very well.
It wasn’t until I played Incubate in Holland a few years ago that I decided to use basically 2 drum machines, a 303 and a laptop, and after that, I needed to work out how to play out my live sets, so I went back to the way it should be, instead of ripping through 40 live tracks, I took my time and enjoy the acid house, listening to the Armando Gallop’s WBMX DJ set and Daft Punks’ ‘Live 97’ always gives me tons of influence, so recently it’s been a complete riot, I’ve fallen back in love with playing live, with a few records that have been coming out I’ve been able to do live versions of them and, for me at least, it’s pretty enjoyable, just got to be simple!

Of late you’ve had a really great run of releases – does this reflect a particularly fruitful time making music or has your productivity always been pretty consistent for you?

The last/next releases out on vinyl is pretty much the work I did last year (2014) Jerome Hill and Ferdi Shipwrec both approached me at the same time both wanting an EP (with Ferdi/Shipwrec, I had just recently had a co-producer credit on a Drug Cvltvre EP on the label), so from April 2014 up until October 2014 I was just smashing out tunes, the harder techno tracks went out on Don’t and the more acid house/IDM tracks went out on Shipwrec. Then i have a 12’’ out on Computer Controlled Records, which was pretty much all the tracks i really liked from all the sessions I did from the Don’t/Shipwrec sessions which didn’t get used. I really wanted them out on vinyl as I was going off releasing stuff on digital/Bandcamp. So the CCR’s 12’’ has been sent off on Monday so should be out in a few months. Which marks an incredible feat of 85% of the tracks I wrote in 2014 came out on vinyl.

It kind of feels like there’s been a nice new wave of labels rising for this kinda music – do you think that’s the case?
Yeah sure, I’m not bang up to date on everything that’s been coming out for the last few years though. Even though it’s not a new label but 030303 are always bringing some new artists though as well, which are always amazing releases, I know for a fact there has never been a BAD or disappointing 030303 release. And even though it’s not a 100% acid label i am totally in love with Mako Records (Proxy’s label), also Jerome Hill’s Super Rhythm Trax has put out some monster acid stuff recently.

Where do you feel your music is most felt like recently you had some great gigs in london for Jerome Hill at Don’t and Bangface – could you enlighten us to where else in the world people are really feeling your take on techno?

Definitely in Europe, Holland and Belgium in particular, I’ve always felt much more at ease playing in these countries. But that Don’t gig in Dalston was really special, it was the first time playing live in England for about 5 years (no one ever asks me), and it being a label night of Don’t, so, I guess there was a slightly large expectation after going on after such a fierce set by Paul Birken, but I think it was my favourite live set I’ve ever done, it was also one of the first times i played out all the new stuff live, and first time I took a slightly more techno stance in a set.

The Bangface set was also pretty nice, although I was on a stage like 5 foot above the dance floor i didn’t have such an intimate setting as I did at the Don’t party.

What’s next for you? You’ve just had EP’s released on Don’t Shipwrec and CCR are there any others signed we can look out for?
At the moment I’m having a little break for a few weeks (as of March 21) but come April, I’ll start to write some new music in a slightly newer approach for next year, but looking back at this year, I have a 10’’ vinyl coming out, though i can’t say much about it, but it’ll be amazing, by the end of the year, as well as the Computer Controlled Records 12’’ Righteous Acid Beats EP

And a cassette tape of some old tunes on Acid Waxa, I like going through my archive and hearing old tunes that i forgot about and putting them out for free on Soundcloud, you know giving something back to the people.

This mix you’ve done it’s pretty much all your own production right – what kind of exclusives can the listeners look out for?

Yeah apart from 2 or 3 tracks they’re all my own tracks. There is a few italo tracks I’ve been working on and off for a few years, some brand new stuff as well, which I’m not sure if they’ll end up being released, too soon to tell. But it’s been 7 years since i last did a mix of all my own productions, so it was pretty fun.