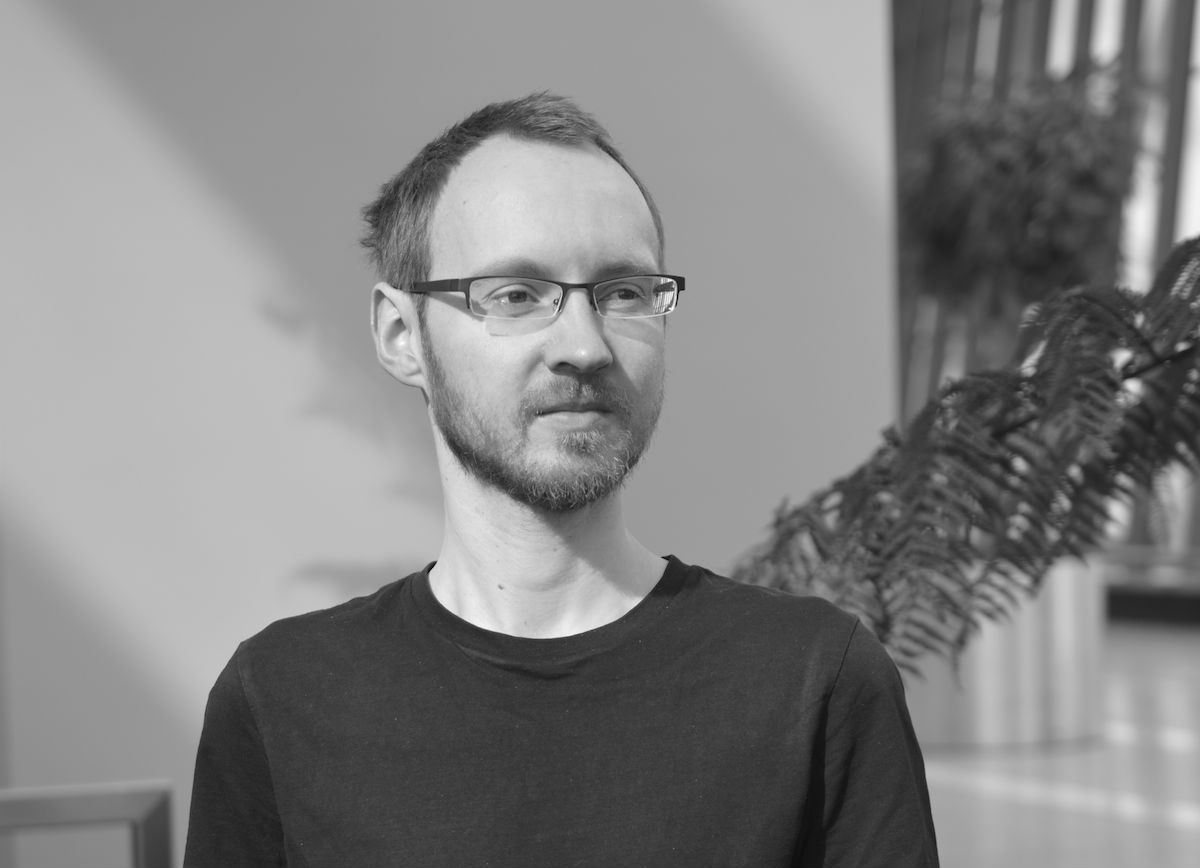 Heading up the null+void Podcast #39 is Shinra (real name James Clarke) an artist felt pretty closely to this site, he’s set to be the first producer on our soon to be launched label with the record set to drop this year.

In the mean time he’s been busy in the studio feeling a sense of rejuvenation after a latent period and has produced over an hour’s worth of new material that he first tried out in support of Anklepants at a Love Love Records gig at the end of last year, a set he’s reworked to present today.

With something special coming from him in the way of a four tracker EP and null001 it was a pleasure to speak to Clarke and talk back through his recording and production history while also touching on how he’s found a new sense of productivity that has spurned all the fresh production that you can hear in this mix.

It’s funny I can actually remember the night I first met you at one of our mutual friend’s house parties which was probably over ten years ago now, he’d taken all the furniture out of his bedroom and you were the first DJ ever to be known (by me) to be playing on Traktor – how long back did you start playing and making music?

I’ve played the piano ever since I was a child, and my first memories of making electronic music are using a copy of Octamed which came free with a magazine on the Amiga 600 when I was about 10 years old. I can vaguely remember that it came with some rave samples (stabs and vocals and drum loops) and I had a lot of fun playing them, pitched up and down, using the computer keyboard. It was just messing about, really. I have no idea what kind of music I made, or even if I was particularly aware of musical genres at that age! After that, for some reason, a friend and I both bought some decks when we were about 13 and taught ourselves how to DJ.

Looking back, that seems like a strange thing to do, but it seemed to make sense at the time. I’ve still got quite a random vinyl collection of French house music (I was really into Thomas Bangalter) and slightly incongrously, Paul van Dyk-style trance from about 1997-2001. In about 2000, I discovered Aphex and Warp records, and my musical tastes changed (I’m still fond of the French house, the trance – not so much).

The first tracks that I finished properly were done when I was about 18 or 19. They were mostly hyperactive breakcore/drum and bass. I’d moved to London around that time, so I speculatively sent off a CD to Saint Acid, who offered me my first ever gig, an hour set at Bang Face in March 2005. I think I’d sent off the CD a bit prematurely because I only had about 45 minutes of music to play! So before the big day came I had to write some more tunes to make up the full hour. That gig went really well, and between 2005-2010 I played various gigs around the UK (and also in Belgium). Since 2010 I’ve not really been active, so now I’ve got to build a following from the ground up…but I’m ready to get out there and start playing live again.

What kind of artists did you first get to know that inspired you to get involved yourself?

Fairly soon after getting into electronica through Aphex and Squarepusher, I bought the Braindance Coincidence, which introduced me to lots of Rephlex artists like Bodgan Raczynski, Ovuca, DMX Krew. It’s such a great album, and there’s a distinctive homemade sound to a lot of it which inspired me to try and make some similar music myself. So I think it’s probably those artists which initially sparked my interest in making my own music.

Can you tell us a bit about what you actually use to produce, how has it developed over the years?

When I started making music properly, I used a tracker program – Renoise. I still think that Renoise, and trackers in general, are probably the best tools to chop up breaks and make jungle/breakcore with. But I found it awkward to sequence whole songs with Renoise, so I started to use Cubase.

Since then (like everyone else!) I’ve migrated to Ableton which I think is a fantastic piece of software. I mostly work just with a Nord Lead synth and samples/soft synths in Ableton. I’d love to get some more hardware, but haven’t really got the room.

In the past you’ve released for the likes of Love Love and Wide Records can you tell us about your involvement with these crews?

My involvement with Wide Records began pretty simply – I’d stopped making breakcore and had got more into electro, and was looking for somewhere to release my new music, so I sent some demos to them. They got back to me asking to release an EP, which ended up being “1986”. After that I did several remixes (I’m particularly proud of my one for Chrissy Murderbot) and another EP. Alan (DJ Cutlass Supreme) and John (Debasser) who ran the label were great – they were really supportive of me. It’s a shame that the label has wound down now, but I’m really grateful to them for putting out those EPs.

I’ve only been involved a little bit with Love Love records – I first met Sam (Fez) at a night we both played at in Reading called Fractals. He ended up asking me for a track for their first compilation which was “1985”. We’ve kept in touch since and I played at their recent Anklepants night, which went really well. They’ve been putting out some excellent music – I particularly liked Scrase’s 2 recent EPs.

Like the tracks that are going to be on null+void’s first release by yourself are a few years old now – but you’ve made a hefty weight of pretty great new material that features in the mix what kind of stuff have you been feeling over the last year in the studio?

This past year, after a long period of very low productivity, I’ve been making myself finish a lot more music, and have been working on trying to build up momentum, which seems to be working, so I’ve been feeling pretty positive and the ideas have been coming pretty fast. Influence-wise, I’m not quite sure what I’ve been feeling when I’m actually in the studio – I try not to be too obviously influenced by other things, but I suppose that whatever I listen to seeps into the unconscious and will come out somehow. Stuff that I’ve been listening to a lot recently includes Shadow Dancer, Clark, Jodey Kendrick, Objekt, Bill Youngman, Stephan Bodzin, Lazer Sword, Datasette…lots of different stuff.

This set was also recorded at a party for Love Love Records is it a kind of hybrid DJ / live set? can you tell us how you put your sets together when you play out?

This set started off as the Love Love set, but I’ve since gone in and changed about half the tracks, so it’s pretty different now! This was done mostly as an Ableton DJ set, with a few extra loops – since the music is unknown anyway, I didn’t see the need to deconstruct it live. So this set was done as a showcase of the different types of music I’ve been working on recently, just to get it out there and heard. For future gigs, I’m working on a new hybrid DJ / live set at the moment – I’m collecting and creating a load of pretty stripped down, relentless electro, with some techno thrown in. A bit like DJ Stingray but a bit slower and with a bit more of a UK sound rather than all Detroit. My favourite kinds of live set all have some kind of mystique to them (like Dopplereffekt in their masks, or Stingray in his balaclava), so I’m going for a similar thing – I often find it a bit off putting to see a laptop DJ just staring at a screen, so the set I’m putting together is designed to be experienced in a darkened/smoke-filled room – I’d rather not have stage lights on me so that the focus is on the music rather than me…

In the future, I might work on a full live set, but I’m not that convinced that it’s a great idea to spend a lot of time in the studio perfecting tracks, only to deconstruct them and make a slightly less polished version live just for the sake of doing something on a stage. If there’s hardware involved, that’s another story, and is much more exciting to watch – but since I don’t use much hardware, for the moment I’ll be sticking to DJing my own and other suitable tracks, with some extra loops thrown in, and a midi controlled 303 emulator for some acid squelchiness.

Your record is going into production now but what else have you coming up release wise you’d like to share here? Any other releases or remixes due out?

Coming up this year after the Null+Void release, I’ve got an EP of quirky melodic electro/electronica coming out on Lifecycle’s Ricochet records. I’ve also completed an acid electro remix for Chevron which should be coming out soon when his album drops on Balkan. And another new acid track will hopefully be getting a release on Balkan a bit later in the year, which I’m really excited about…