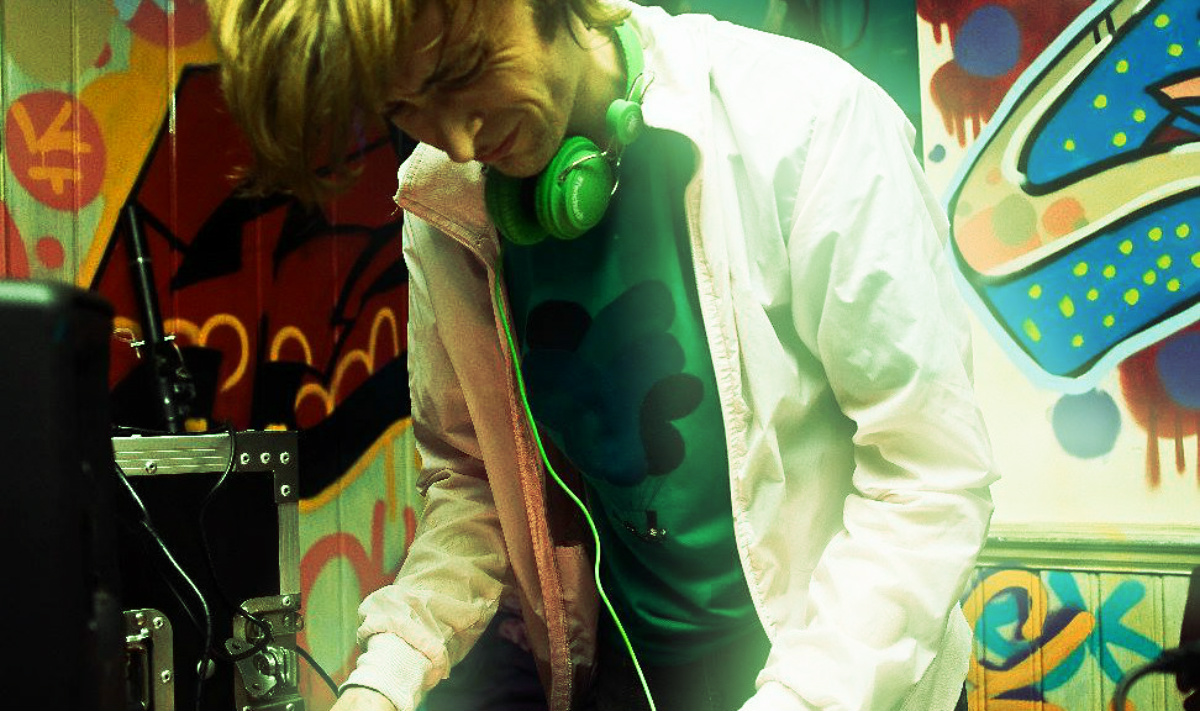 I’ve witnessed Ben Pest in many live forms over the years rocking out on a Nintendo DS, in full hardware synergy with Cristian Vogel under their Black E moniker and also playing all reams of electronic funk in a DJ capacity. He’s also an artist comfortable creating on pretty much any platform you throw at him and under a huge range of collaborations – as keyboardist for Ninja Tune’s Pest or in the studio with Luke’s Anger as Bebop & Rocksteady even finding himself most recently in the studio alongside Keith Tenniswood (Radioactive Man). There’s a common thread before his work this off kilter funk that’s pleasingly odd – I’ve been a fan for quite some years now so finally nailing a mix from Mr. Pest is quite the score for the null+void podcast series.

So Ben when exactly did music start for you?

Hard to say exactly. I remember my dad having one of those stacking / changer vinyl players from the 60s. bought my first 7″ from woolies in Collier Row, Axel F by Harold Faltermeyer.. but always loved it for the b side ‘shoot out’.

What were your early influences was there a particular musical scene that got you involved?

How did you get started in producing? What kind of gear was available then for you?

My school had an Atari with Cubase 1.0 and a Roland s-550 in the music stock cupboard, so there, I suppose. I worked in a music shop for a bit after that so got myself various keyboards. Eventually I had keyboards plus Tascam 4 track cassette thing and an FX box or two, loads of fun. Couple of years later I spent the entirety of my first student loan on a Nord 1 rack and an Akai S950 running off an Amiga.

I remember many a set with your DS Korg – what do you like about performing on those? It seems so old school now with ipads but I guess then they were some of the only touch screen technologies available…

Still love that Nintendo for the DS-10! I first saw Michael Forshaw bang a set with two DS’s and I said “fucksake I play Mario Kart on mine! what was THAT?!” – he thought I was taking the piss but I wasn’t. It’s limited, and only does 1 bar loops but it excels at industrial sounding techno and there are some lfo tricks to make em sound like 2 bars, even though they aint. I’ve got so many patterns on there have never seen the light of day I still need to get out of it. The horror boogie 12” I did earlier this year has 2 tracks which are purely DS-10 sounds sorta ‘produced up’ as it were.

Exactly how much and in what ways has working with Logic’s latest version changed how you work and the outcome?

I just shoved Komplete 10 in there so that number of options is now exponentially ridiculous.. Almost too many! It’s all completely brilliant, natch, but I have to set myself some arbitrary limits at the beginning or my music making goes nowhere fast. That South Park episode where they show Randy using Logic just made me laugh! Yeah it’s ‘almost too easy’ but only if you want to go down some predetermined route, which i never do. to me it’s all just an extended writing tool. Hardware is all about the limits though, and generally that stuff gets messed with very little compared to the tracks I start from scratch in Logic. I’ve been getting really into making tunes with a tb303, tr808 & tr909 recently & just letting them roll, jam it out. Sometimes I have better results when I make life difficult for myself. It’s all random.

Obviously over the years you’ve collaborated with a number of people – Luke’s Anger, Cristian Vogel and more recently Radioactive Man what do you like about working with others in the studio? can you tell us anything about these individuals in particular?

Collaboration is one if the best things about music. It’s just so fun and satisfying when it works. It’s also great to have someone else around who even if they aren’t doing any of the actual production stuff, they are still contributing on an integral vibe level type thing. To me that’s still 50/50 collaboration. Anyway, if you go into it with that attitude then everyone does their bit, I find. Collabs with Luke are great because they’re are no rules, as such. Can be in person or remotely. Its more just like a very protracted and ever-ongoing conversation which happens to yield tracks I love. Result! With Cristian we spent 4 or 5 days in his studio in Barcelona, and made a whole EP from scratch. Pretty good going. With Keith Tenniswood it’s been few ideas developed over this last year and now coming together into an EP. Some tracks have come together more quickly though. As I say, there are no rules as such. The Pest boys are my longest running collaborators. Oh yeah and I didn’t name the band after me by the way! I was asked if that was the case, once. No my mate Grant aka Sikaflex suggested Ben Pest is what everyone called me anyway, so there you go.

In this mix who’s on it – what other artists are you listening to at the moment?

The mix is all my stuff apart from some Bebop & Rocksteady tracks, which I wrote with Luke’s Anger. I’m far from ignorant to other music, though. My sound is fairly distinctive for better or worse, iv made loads of tunes, and they seem to make sense to me mixed together on Traktor. What can I say. Been listening to Phatworld vs Squire of Gothos on my tube journeys, big smiley music. Loads of the electronica I love is made by my mates but I’m always grabbing various other bits and bobs – I’m less of an artist follower generally, I’m more about certain tracks. But rules are there to be broken etc. Luke Vibert is consistently great. Gutted about Mark Bell too, loved so much of his music and saw him live a few years ago. amazing.

There’s quite a few releases you have coming up can you give us a quick run down what’s forthcoming?

Fun in The Murky 02 which I’ve got a track on is dropping this week. There’s a 5 track EP on Balkan Recordings very soon and a track on the next Balkan Vinyl 12″, an Off Me Nut EP and a couple of tracks on new vinyl label The Beyond. And a Bebop & Rocksteady cassette release on Acid Waxa. Got this thing currently in production with Radioactive Man too. I’ll squeeze another EP of my tracks via my Bandcamp page in due course.