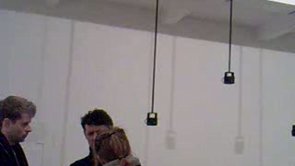 Florian Hecker at The Chisendale Gallery

Florian Hecker @ The Chisendale Gallery from null+void on Vimeo.

From now until the 28th of March electronic computer music composer and artist Florian Hecker is showing at the Chisendale Gallery. I went along to the private view on Thursday and took the above video so you can get a vague impression of what to expect, despite there being a lot of chatter in the room at the time the sounds still were loud and directed enough to carry out their intended jobs. I’ve never experienced sound in this way before, after getting a taste for it at Aphex Twin and Hecker at Bloc last year I realise now how the elements to what I was hearing were working and it’s really what made that Aphex performance so memorably good.

Hecker holds much critical acclaim for his studio albums bolstered by his work by commission and sound installations. If you have Spotify you can listen to Acid in the Style of David Tudor (2009) and Sun-Pandämonium (2003) in full.

He is a master of sound, experimental in a successful way the travel and transportation of how the sound is heard makes for an immersive exhibition and a strong impression of masterful sound design and creativity.

The exhibition runs until the end of March and is a real must see. More details including the press release are on the gallery’s website.

Also this is a good link: via The Wire – Video of Pentaphonic Dark Energy @ Sadie Coles HQ 2008