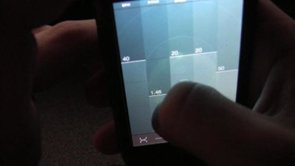 synthPond is a recent release for the iPhone OS developed by Zach Gage, a digital mixed media and installation artist based in New York. It’s a generative audio spatial sequencer not too dissimilar from Toshio Iwai’s work Electroplancton which was released to critical acclaim on the Nintendo DS a few years ago.

As with a lot of these sequencers that have been popping up recently, synthPond offers an alternative way of thinking about synthesisers (which have largely taken their interface queues from the old analog synthesisers of yesteryear). Instead of placing notes on a grid and having a virtual playhead move over them the notes in synthPond are placed on a field and the a note is emitted from them at the source. The note affect neighbouring notes and can can cause a chain reacton in notes being played.
The result is the ability to create quite organic and seemingly random sounding compositions in a very structured manner.

The newest version allows the software to be linked up with the previously mentioned OSC which opens up the possibility of full-on audiovisual performances.

Here’s a video of Zach explaining the software:

synthPond 2.0 Tutorial from zach on Vimeo.

A free ‘lite’ version is available with the full version costing a thouroughly reasonable £1.19. Also be sure to check out the Author’s other work on his website.