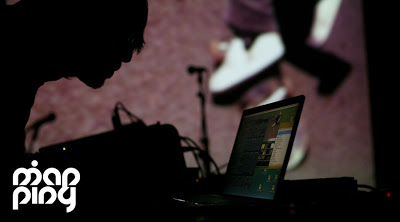 When I went to Glade festival two years ago (a total washout thanks to the extreme weather) I was so blown away by the quality of the visuals and lighting that I wasn’t really paying much attention to the music. Must have been something I ate. So I was interested to hear of the Mapping Festival in Geneva, a festival dedicated purely to AV performances. There’s been some good feedback about this festival. CDM had this to say about it:

The first two Mapping Festivals quickly became legendary. An audio line-up worthy of a music festival, a cream of visualists married to a playground of seemingly a thousand projectors… Complete with dormitories above and sofa-strewn cinema to the side, the party didn’t stop.
Now in its fourth edition, Mapping has changed into a two/three week showcase split between the original venue ‘le zoo, pour les animeaux nocturnes’ and Geneva’s modern arts centre hosting gallery installations and an audio-visual stage.

I guess he likes it then. The organisers have extended the applications to be part of this year’s line-up so if you’re in the audio visual field and fancy performing in Geneva then get your applications in!