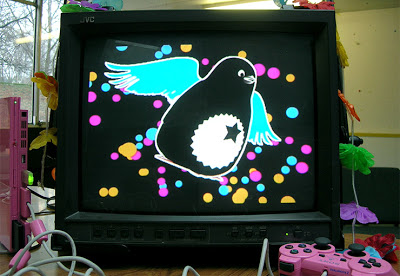 It’s always nice to see artists tinkering with vintage hardware to perform with. It’s even better when they start doing it with old games consoles.

London based VJs Pikilipita are the boy and girl duo who use old gaming hardware to perform visuals. They have a fairly strong history of gigs under their belt having been the resident VJs at London night Braindrop and Glade festival’s Overkill stage to name a few. The visuals themselves are heavily influenced by Japanese pop culture, which is fitting seeing as the consoles they program for are all from the land of video games.

Their current project, PS24VJ is an attempt at using the PlayStation 2 as a VJ controller, also impressively boasting a ‘2 Player’ option. As with most VJ reletated items, it’s better to watch than read, so here’s a video of it in action.

Pikilipita are performing on Friday 27th February at the night ‘Never Grow Up’ @ Fluid, Farringdon, London.