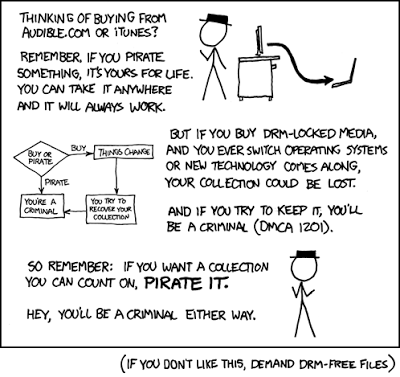 Earlier this week came the announcement that Apple has finally convinced all of the labels on iTunes to drop DRM protection on their tracks. Back in Feburary 2007 Steve Jobs posted an open letter to the industry explaining that the implementation of DRM was done purely to keep the record labels happy and how he felt that DRM was actually working against the industry as consumers went through great lengths to obtain DRM free music (a lot of the time, through illegal channels such as P2P networks). Now some non-conformists/hippies may hate iTunes because it’s a hugely popular service but this announcement should keep even them happy for a number of reasons, namely:

Some people have already come out to say that Apple have made a bad move by opening up iTunes, claiming that customers will now move to different services or buy different hardware.

Personally though I think that, in the long term, this is the healthiest thing to happen to the music industry in a long time.
Now, if only Apple would lean on film companies and get them to drop DRM too. Ah well, can’t have everything now can we?
(Apologies for the slightly soap-boxy post. Needed to get it off my chest).

Comic from the brilliantly geeky XKCD.